We take you on a journey through selected projects to give an idea of our approach to listed and period building repair, the range of skills our craftsmen have and the finished result. 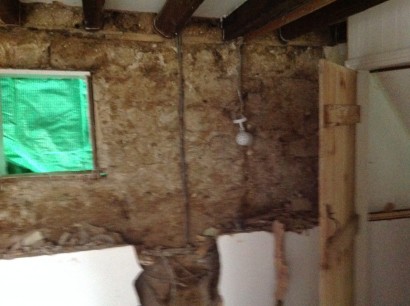 The restoration of a Suffolk Clay Lump cottage

Suffolk clay lump buildings are an increasingly rare structure,all too often they have been patched up using inappropriate materials which over time contribute to their downfall( literally!).
It is a great credit to owners who realise the special nature and character of these vulnerable buildings and then make the commitment to restore them using traditional materials and methods.
One such is a lovely little cottage tucked away in mid Suffolk.
When found it had not been lived in for years, was in a very poor state generally and the clay lump had been patch repaired with concrete,brick, block and cement .
To make matters worse, the ground level to one side had been built up over the years so that it was now some 400 mm above the original,over the flint plinth course and drawing dampness into the lump.
Cement rendered inside and out, the poor cottage was not too far from collapse in places and in fact some professionals claimed it would be best to demolish it and start again.
Luckily the owners appreciated it’s special qualities and the real character that these buildings have and decided to restore and repair using the specialist experience of The Green Man Building Company.
First job ,to carefully reveal,all the bad repairs and assess the damage caused,this meant removing the increased ground level, the cement render and the many patch repairs in brick, concrete and modern block,while at the same time ensuring the cottage could still stand on its clay lump core.
Once stripped back a restoration plan was established and we began to put things back together using skills and materials appropriate to clay lump constructions.
We have now completed the inside, lime plastering the repaired walls and re pointing the flint plinth course.
Part of the investigations discovered that the floor was now a concrete one , that was driving moisture up into the walls, so that was removed and an insulated Glapor and limecrete floor installed, so now the inside is sound, warm and dry!
The lime Crete and the Glapor were provided by Ty-Mawr lime www.lime.org.uk ,who were as always great with their specialist advice.
Next job will be to repair and lime render the outside,once it has had a chance to dry out and the weather to warm up .We will source our lime render from Anglia Lime Company,a Suffolk based specialist supplier.
More on this ,including images ,on the Green Man Building Company web site and an update on the external restoration to follow. 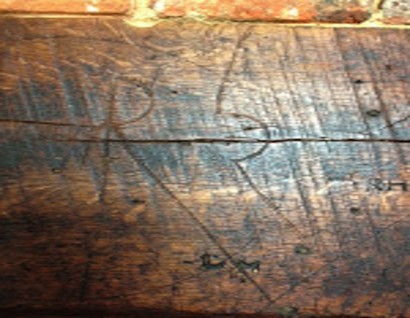 Working with historic buildings as we do, we frequently come across man made marks on timbers, plasters and sometimes masonry.

Some of these are clearly a system for identifying which timber goes where during construction, the more interesting ones though are there for other reasons, some of which we are not too sure of.

These marks,or Apotropaic, ritual or ‘witches’ marks were often carved into doors, windows and fireplaces where the  air, and therefore possibly ‘witches’, could enter a building to protect them from  evil spirits.

Times ,beliefs and customs were different then and just imagine the house lit by flickering candles, quiet ,except for the wind in the chimney and the noise of the draught through the windows, it’s no wonder that they really believed the house needed protection and the marks had real purpose!

Although found  on doors,window frames and jambs of doorways, they are most likely to be found around fireplaces, which is a major part of what we work with.

Among the most common markings are interlocking circles (some carved to create a six-petalled daisy flower effect), concentric circles and intersecting lines creating crosses and M’s representing the Virgin Mary or double V’s for ‘Virgin of Virgins’.

Many marks are not easy to see- very faint and can be best seen if the light is shone along the beam,whilst others are deep and clear.

It is thought that these relate to two( or more) ‘phases’, the really thin, faint ones being cut into the green timber during construction,( but not as identifying marks), perhaps as part of the carpenters’ ‘spiritual’ role, the deeper ones could have been cut at a later stage- the timber has hardened by then and the cuts more difficult to make,hence deeper and in some ways less clean cut, possibly by the owners/occupiers.

That they had a purpose is clear and many have been worked through to logical conclusions, but others may have been more personal codes.

This case study represents the story of just one of the many ingelnooks we have uncovered and brought back into the home.

At first( see pics) the inglenook had been reduced in size and a ‘modern’ fire inserted, once opened up we couild see that the beam was a special one,with an abundance of ritual marks.

Restoration to the fireplace and beam revealed a bread oven to the left hand side and an original floor brick hearth.

The whole tidied up, re pointed and orginal features carefully restored, the fireplace is a real part of the home once more and what a feature!

Timber framed buildings ,some of which have lasted centuries, will, from time to time, require some repair,especially if the timbers have been damp,or subject to wood boring insect infestation.

Repairs should be made by competent craftsmen/women who understand how the building works, which elements can be left in place and which really are beyond viable repair.

The next stage is to assess the dimesions and function of the timbers and the type of jointing required to attach the repalcement to the original.The repair should be an ‘honest’ repair, that is competent and functional, not intending to be hiding the fact that it is a replacement section.

Such repairs will keep the building going, buying it more time if you like, good for many more years, but if and when later investigations are carried out, the craftsmen of the future would be able to tell where the original and later sections are.

Feature Case Study-click on the image above for slide show

This beautiful and ancient listed timber framed cottage had been rendered inside and out with a hard cement render at some time in the 20th Century.

The result was that far from keeping the damp out of the house, it retained it within the walls- wattle and daub with timber sole plate and studs- it did not stand a chance, and the timbers soon began to decay.

The sole plate completely gone and many of the oak studs rotted to a metre or more above ground, the house was in danger of collapse.

With a new sole plate, rotted studs scarfed with replacement oak and the whole rendered with a chalk,lime and hair mix, the cottage is once more a joy to live in and to behold.